At 10:45 this morning, I lost my last feline companion after 19 years together. It wasn’t unexpected, but it came altogether too suddenly…

In June 1993, I decided that it wasn’t right being the only living thing in my house, confirmed bachelor that I am. So I took a trip down to the West Valley Animal Shelter to find a kitten. I very nearly picked Max’s tan, orange and white sister from the litter of six–but the little orange one seemed more lively and interested. So Max came home with me, my first of two cats. He had an orange swirl pattern on his side and when he curled up for a nap he looked just like a little cinnamon bun…

Max was definitely MY cat–he was fiercely protective and extremely loyal to me and only me. So much so that for a good chunk of his middle years, he was known as “Psycho Max” for hissing, scratching and generally being difficult toward anyone coming near me. When I made my first trip to Japan in 2006 and my parents were taking care of him and Victoria, one day completely out of the blue he bit my Mom on the leg! I’m surprised she kept feeding him after that.

Thankfully he mellowed a lot with age until he got along with most everyone, though he remained somewhat shy and reclusive when other people were around.  After Victoria passed away in 2008, it was just Max and I. He became a lot more affectionate with me since he no longer had a playmate and since he knew I needed the companionship.

Just about a month ago, I finally saw age starting to take its toll. He stopped jumping up on the countertops. He moved a bit slower than he used to and seemed to feel slightly thinner and more delicate each time I picked him up. Exactly two weeks ago, his hind legs started to wobble when he walked. Then this past weekend a lot of different things started happening so I made an appointment with the vet. He was still eating heartily, even yesterday morning. When I got home last night, he could barely even stand and I had a real fear he wouldn’t last until his appointment with Dr. Tracy today at 11:00.

And I was right. I was working from home today, keeping a close eye on him. When I got up to check on him at 10:00, he was lying in the bathtub barely moving, barely breathing. I wrapped him in a towel and rushed him to the vet’s office.

Dr. Tracy made a last-ditch effort to see if perhaps it was something that could be treated, but no dice. The only thing left was to allow him to go, peacefully. I had to make that horrifying decision once again. And sit in the dimly-lit exam room, slowly petting him until  it was over.

Dr. Tracy said I should be proud of myself–19 years for a cat is like 95 for a human. She’s had cats all her life, but never one that lived that long. And he was indeed a great companion–but it still hurts. I now am once again living truly all alone.

I’ll never again roll over in the night to find him curled up in bed next to me. He won’t come running to the door when I get home in the evening, demanding to be fed. I can no longer slowly pet his soft, cinnamon-swirl fur while listening to him purr. 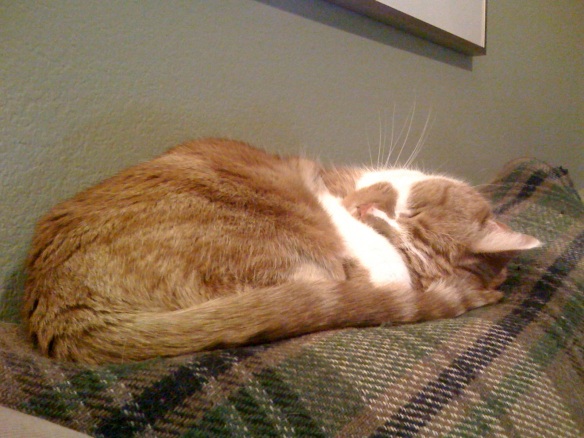 (By the way, Max got his name from Max I Joseph, First King of Bavaria.)