I’m using a brand-new (to me) journaling program called MacJournal to create and post this entry. It’s a pretty neat little program that lets you combine all your written journals together in one place, publish to blogs (like Blogger), encrypt things you want to keep private, have as many journals as you want—and even publish podcasts and include video. Maybe it’ll spur me to keep a better record of my life and publish more regularly to this blog.

The “Getting Ready” part is that I’m preparing to leave for Japan in 3 days. I’m going back to study for another month at KSU followed by 10 days vacation. My goal is to really be able to converse better in Japanese. I’ve also got it in my head to look for employment there and during the vacation time to hop over for a quick visit to South Korea.

Of course, I’ll be keeping my journal and posting photos—and hopefully even podcasts and video this time—religiously, but not using this blog or this swell new program but rather my usual iWeb tools (sigh…)

Be sure to check out the happening regularly over on my personal website:

[NOTE – Original blog was shut down in June 2012. All entries have been recreated here on this blog.]

SO then—not that you’ve bee reading anything here regularly anyway, but you definitely won’t read much here until I get home at the very end of July!

There was in interesting email in my inbox today from Paul Churton at Kyoto Sangyo University.

It seems that beginning this year, they intend to offer a third-level class as part of the IJP program—the one I attended in 2006. It also seems that they are opening it to general enrollment rather than having to go through a particular University. It’s also possible—and cheaper—to attend the program without receiving college credit.
It looks like the same month-long program will be more than $1,000 less than I paid in 2006! Granted, I won’t get college credit and there won’t be a company to reimburse me for my tuition, but that’s still a terrific deal. I’ve also got enough Virgin Atlantic miles to get a free roundtrip ticket on ANA.
In case you can’t tell, this is an opportunity I’m extremely excited about and very seriously considering. I can get back to Japan again for an extended stay, with a true purpose and for a relatively low cost.
Incidentally, did you know that in the current global currency environment (with the Euro so high) that traveling to “expensive” Japan is actually a better deal than traveling to europe?
Why not come and visit me there!

Last night, I attended a performance of the Bunraku National Puppet Theater of Japan in Little Tokyo at the Aratani Theater. It was nothing short of amazing.

Bunraku is one of the three traditional theater artforms of Japan, along with Kabuki and Noh. Having actually never seen any of the three, I jumped at this chance, shelled out $60.00 for a good seat and was not disappointed. It was the first time the National Puppet Theater of Japan had come to the US in nearly two decades. 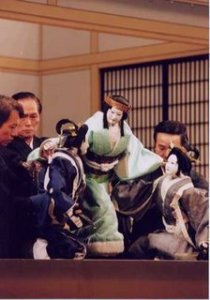 It’s a unique type of puppetry unlike anything you’d usually imagine. Essentially, the puppets—approximately 3 feet tall—are worked by three men who are in plain view the entire time, a master puppeteer and two assistants covered with black hoods. The story is told from the side of the stage by a chanter with music provided by a shamisen player. The chanter has to provide not only narration, but the voices of all the characters as well. The shamisen player’s technique and music create the moods and sound effects (like crying, footsteps running, and so forth).

The puppets themselves are quite amazing, especially the heads, worked by the master puppeteer’s left hand. Male puppet heads have articulated features like mouths, eyes and eyebrows and it’s incredible the emotion and life that can be given with only those simple features. Gestures, costume changes, moving feet, using items on stage are all handled by the three puppeteers working their parts of the puppet and essentially “ad-libbing” the movements in realtime. After watching, spellbound, the puppeteers almost disappeared as I became absorbed with the puppets themselves while taking in the story as recited by the chanter.

The show’s first half had a short piece entitled Oshichi’s Burning Love—The Fire Watch Tower
about a maiden who raises the town’s fire alarm so that the gates to the city will be opened and she can return a treasured heirloom to her lover who, having lost it, is under penalty of death. Of course, raising a false fire alarm is also punishable by death and she therefore sacrifices her own life for his. It was very short, but fascinating—especially how they had her climb the ladder to the top of the tower.

This was followed by perhaps the best part of the performance. Each of the players in Bunraku—chanter, shamisen and puppeteer—each demonstrated and talked about what they did. The chanter spoke about 100 MPH and I was trying really hard to understand—fortunately there was a translator. The shamisen demonstrated all the different sounds and techniques he could produce from just his single instrument. The most fascinating, though, was the puppeteer who showed all the parts of the puppet and all the different techniques and movements used to let the puppets “act”. It was extremely interesting and contributed so much to the enjoyment of the final performance.

That final story was really moving. Miracle at the Tsubosaka Kannon Temple—Sawaichi’s House and the Mountain tells the story of blind Sawaichi and his faithful wife Osato. He hears her slipping out of the house every morning, and thinks that since he’s blind and of no use, she’s being unfaithful to him. She explains that she faithfully prays to the Kannon every morning to ask the goddess to restore her husband’s sight. After sorting out that misunderstanding, Sawaichi wants to go to the temple at the top of the mountain to pray to the goddess himself, and the couple make their way there. Once arrived, Sawaichi resolves to remain for a three-day fasting vigil, so Osato returns home to get a few things for them. Sawaichi decides he’s been too much of an untrusting burden on his wife and throws himself off the cliff to his death. Osato—sensing something bad has happened through a terrible premonition—returns to see her husband’s cane and shoes left behind, and his lifeless body at the bottom of the ravine. In her despair, she too jumps from the cliff so they will be together.

But, the goddess Kannon, having heard Osato’s faithful prayers takes pity on them and restores them back to life—complete with Sawaichi’s eyesight! All the tension and sadness fortunately takes a more lighthearted tone when Sawaichi—seeing his wife for the first time ever—asks anata wa dare desu ka? (Excuse me, but who are you?) They then rejoice and exhort the audience to believe in the goodness of the goddess Kannon and the great Buddha and resolve to go off on a pilgrimage to “spread the word”, as it were.

I absolutely could not believe how enthralling it was and how emotionally involved I got with the story and characters. It was an experience I will treasure and not soon forget.

For more information, check out Bunraku on Wikipedia.

Well, I’m back from my 6-week trip to Japan. It’s hard to believe that a) I was actually gone for that long, and b) that it’s all over and I’m home again. Of course, there’s now a ton of stuff I need to do both at home and the office, I still have jet-lag, it’s incredibly hot here right now and I’m suffering from “post-vacation depression”.

I went back to the office yesterday and started trying to get my bearings once again. BTW, I had a total of 367 emails in my mailbox (and Mike Kubit won the pool), so I spent most of the day dealing with that mess. Then trying to catch up on all the happenings in the office and with the projects I’d left behind—everything just moved on without me. I’ll be pretty busy for the next couple of weeks digging out from under.

The depression especially began when I went to lunch at one of my usual spots, California Pizza Kitchen. As I was sitting there eating one of my regular favorites and thinking about my usual office-related concerns, it started feeling almost like my whole Japan experience never happened. That really started to make me sad. I had such a wonderful time and met such wonderful people, that I didn’t really want it to end—thought it would continue on. But then, “regularly-scheduled life” sets in, and all of a sudden, I’m back in my usual rut. So you can see how that might be depressing…

You can, however, look forward to many, many more musings from me here on this blog since I’ve now sort of gotten in the habit. I also want my new Japanese friends to have an easy way of seeing what I’m up to if they’re so inclined. I have a lot of things to say about just how much my Japan trip changed my life and how happy I am that I went.

But in the meantime, I’ve got lots of work to do…

I cannot believe that the Spring semester is already at its end. We just had our last day of Japanese 27 today—with our oral finals and a big feast provided by Yamaguchi sensei. Life just seems to go by so fast. And, of course, despite all my best intentions, I just never seem to get around to updating pages, adding blog entries, etc. I could have been wiriting and contributing so much.

BUT, that should be changing soon…

You’ll notice a new link on the navigation bar just under my blog called “JAPAN 2006!” This is going to be the place I will update furiously—hopefully at least daily—during my impending month-and-a-half stay in Japan this summer. I depart June 14 for Kyoto Sangyo University for a month-long INTENSIVE Japanese course. I will the follow that with a week and a half vacation—I already have my railpass and even rented an apartment in Tokyo.

This blog will therefore fall “silent” during that time (not that it was ever very chatty in the first place). I urge you to check out my Japan pages regularly!