“… now that I’ve created a wonderfully simple life, I plan not to lose it to the Internet. We can keep abreast of the technology that is appropriate for our lives without losing our souls to it. All it takes is a clear vision of how we want our lives to be, and the discipline not to let them be overrun by so-called progress.” 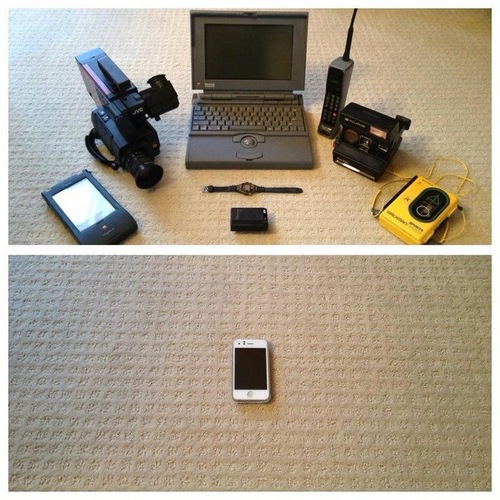 Here’s how far technology has come in the last couple of decades–I actually used to own most of the items in the top photo at one point or another. Now it sure is easier to carry all of it in the nice, compact package shown in the lower photo…

(This came from W&CIE via the Minimal Mac blog.)

Unbelievably, my last bog post—a quote—was way back in October! But then again, it's that time of year when everything gets ridiculously busy followed by a few weeks of absolute quiet (I'm talking about work here). In addition, I had a fairly bad cold over Thanksgiving and lost my voice for almost two weeks; I'm still trying to get rid of that last little bit of it that's hanging on in my chest.

So what exactly have I been up to, you wonder? Well, pretty much the ususal. The exception was Anime Vegas over the Veterans Day weekend which was lots of fun (and lots of work) as usual. I'm proud to say that our annual Charity Auction—this year to benefit the National Multiple Sclerosis Society—set a record at $6,019.00, nearly double last year's take. I had the chance to see old friends again and make some new ones, and as part of the Guest Relations staff it's always a blast meeting our visiting voice actors and others.

Another big thing that happened is that I'm exiting the market. on “Black Friday” I sold my last remaining shares in Amgen and have used the procedds to wipe out around 30% of my non-mortgage debt. I only have a couple of small mutual funds left to go before the end of the year. Why? I have very little faith in the economy, stock market or political situation in the country, especially following the disastrous presidential election results. It's only going to get worse, so cashing out while taxes are lower and market prices are reasonably high seems like a good idea. Paying down debt is helping to ease my mind and hopefully pave the way for other big plans in 2013. Next big project will be to start selling all my worldy possessions…

Finally, just yesterday I receive my Brydge+ keyboard for iPad and it has greatly simplified doing lots of text work on the go. In fact, I'm writing this post sitting at Egg Plantation in Newhall, CA, where I've just finished lunch. I'm attaching a quick photo below, but expect an actual review of this wondrous piece of technology in the not-too-distant future.

“Options are great things, but too much of any good thing is bad. Google’s nonchalant attitude towards skins and carrier-loaded crapware has left many good phones crippled by software, not to mention users annoyed. Fragmentation, multiple appstore experiences and more all leave Android users left to fend for themselves, but in the good, open way people were hoping for when Android shipped.”

— Forkbombr: On the Promise of Android’s Openness

Too many options are sometimes bad. Less options, each one with good quality, are most of the time more.

I enjoy reading Patrick Rhone’s minimal mac blog (that is, when it’s actually up and running since it’s based on Tumblr…). Sometimes he has really insightful articles, like this one about where exactly Microsoft made its biggest mistake.

I would highly suggest you read the entire post to see how spot-on it really is. I probably shouldn’t ruin it for you, but it’s just too good not to quote the final summation:

Microsoft’s biggest miss was allowing the world to finally see the truth behind the big lie — they were not needed to get real work done. Or anything done, really.

And that will be what ultimately kills them.

With this week’s shocking news from HP that they’re leaving the PC business and the Tablet/Smartphone business, it’s a great time to be an Apple aficionado. Maybe HP is actually doing the right thing (albeit in a rather un-elegant way) by finally admitting that they shouldn’t be trying to compete on every platform at every level.

But this post isn’t as much about my position as it is about reblogging a brilliant post by Patrick Rhone from his Minimal Mac blog. I liked this quote, but there is so much more in the full post (linked at the bottom):

The iPad is causing such disruption in the PC business that HP, a company fundamental to the creation of the personal computer itself, is getting out of the PC business.

His main conclusion is that nobody can compete with Apple on the iPad front (and that they should just stop deluding themselves by calling it the “tablet” front) and instead should begin doing what Apple does: creating entire markets.

Dear Anyone Else Who Thinks They Have A Chance In The iPad Market,

You don’t. The iPad is the fire that sucked all the oxygen out of the room. Apple zigged and you guys are still trying to figure out what a zag is.

Apple did not beat you with the iPad. They beat you with the iPad market. A market they created out of the ashes of burning netbooks, low cost laptops, and PCs that no one really liked or wanted in the first place. There simply was no other option at the time available for them to buy otherwise. Apple created that option.

The whole post is really quite insightful, and not necessarily unabashed Apple fanboy-ism either. Read it all by clicking here.