Today was the day for the Great Pilgrimage—to The Foundry in Nottingham, of course.

After the usual hearty English breakfast, it was time for the Midland Mainline high-speed train to Nottingham. The English countryside was really lovely and green as one would imagine.

Nottingham was really pleasant. We spent some time shopping and walking through the old town. Funnily enough, we didn’t actually see or go to any “Robin Hood” attractions. There wasn’t a lot that I took pictures of, but here’s a lovely view walking from the train into town.

Originally planning to purchase an all-day bus pass and ride the city circular route, before long we found ourselves at The Foundry. Mecca! It was pretty fun running around throwing pack after pack of their lovely figures in my little shopping basket until it was overflowing. The biggest surprise: they had a whole bunch of the now out-of-production Napoleonic Bavarians! Needless to say, I ended up spending FAR too much (£400.00 vs. the £250.00 I’d planned to allow myself). But hey—it’s still cheaper than buying from home AND they gave me a V.A.T.-back receipt so I’ll get even more back at the airport. 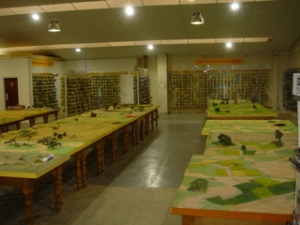 How fun would it be to game HERE every week?

A HST ride back to London was followed by a bit of relaxation and battery recharge for the cameras. It was then club night, and we went to dinner first at one of the famous Wagamama noodle places—it was really good. It’s always shocking to me to see how many people (including us) go out to eat at 10:30 PM! It was then time to make a visit to that famous palace of nightlife, Heaven. It was a lot smaller than I remembered, and Eusebio was fairly nonplussed. I thought it was kinda fun—mostly the people watching—and I even got propositioned. However, we ended up leaving around 12:00 and making it back before the Underground shut down for the night.

Yes, it’s true: we actually had quite a lovely, sunny day today. That was great since we spent a while walking through Regent’s Park and all over town.

Today was earmarked for the Sherlock Holmes museum. We got there a bit early, and in wandering around managed to get ourselves into Regent’s Park. It was absolutely beautiful! We spent nearly an hour walking around looking at the flowers and gardens and everything.

Just one of the many, many lovely flower beds in Regent’s Park.

We did finally make it to the Holmes museum, though, which was pretty cool. Of course, the “real” 221B Baker Street is in the middle of this huge bank building, so the museum’s a little way up the street. It was pretty convincing, though, and a lot of it reminded me of the television shows. They had a lot of old Victoriana and some convincing displays of various Sherlockian characters from the stories. The fun part was “Dr. Watson” who was there and spoke with us for a while. He actually knows both Chuck AND Jerry and has visited both in the U.S.—it’s a really small world…

Me and Dr. Watson in Holmes’ study.

Since it was nearby, we also visited Madame Tussaud’s. It was expensive—£20 each—but was kinda fun. I can hardly remember my first visit here way back in ’84. It was almost uncanny how real some of the figures were. We had fun getting our pictures taken with all the different characters. Oh yeah—damn all the French: there was a display with President Bush and Tony Blair where you could stand a get your photo done. Some idiot French teenager thought he was so funny standing between them and giving each the finger…

Perhaps the closest I’ll ever get to the Royal Family…

…or two of history’s greatest generals.

I must admit that it was fairly exhausting. The fact that my left knee has quit functioning properly wasn’t much help, either. We had to stop back at the hotel for a bit and recharge some batteries in the cameras (not to mention my batteries), and then it was off for stop number “two”, the Tate Modern museum. It’s an incredible building, though I must say that I wasn’t too keen on most of the “art”. Don’t get me wrong—I really like much modern art (especially minimalist stuff like Mondrian and Rothko), but a lot of the stuff there was just plain weird. We had lunch at the cafe on the top floor with spectacular views over the city.

Tate Modern and the Millennium (or “Wobbly”) Bridge.

I then optimistically suggested we go do some shopping on Oxford Street. We did so, and by the time we finally got back to the hotel, I felt like a lame horse needing to be put down. I think that maybe I’ll have to see the doctor when I get back—or is this merely what I have to look forward to in my old age? Had a nice dinner at Pizza Express (hmmm…I detect an Italian theme…) and then in bed for a refreshing sleep (yes, I actually slept pretty much the entire night, so I’m getting over the jet lag quicker than I’d thought).

Right now, we’re on our way to Nottingham; more later…

While I’m excited to be here, it seems like just another normal destination. I guess that’s a function of the frequency of my visits.

We arrived yesterday after the requisite 10+ hour flight which was uneventful but long. Virgin Atlantic is definitely the way to go, even in steerage (though once you’ve flown “Upper Class” you’re ruined for life). I think I may prefer taking this flight over the earlier one, though; it seems as if there’s less time to force oneself to stay awake after arrival before getting to go to bed for the night.

It seems like just another normal day. Coming to London no longer has some exotic air of international intrigue about it. I guess this is the 7th or 8th visit I’ve made since fall of 1999, so I’m not surprised. Especially in this day and age of cheap tickets, this is a very do-able weekend destination. Our tickets cost less than flying to New York.

We’re staying at the pleasant Hotel Alhambra in Argyle Street, across from St. Pancras train station. We went and had a lovely dinner last night at a charming italian restaurant called Prezzo in Euston Square. Most restaurants here are so cool and modern—very sleek. I was particularly impressed by the beautiful room divider, all made out of various pieces of scrap lumber. Why don’t we have such chic, modernist interiors back home?

Then that was pretty much it.

On the books for today (so far): the Sherlock Holmes Museum, the Tate Modern Gallery (plus a spot of lunch there) then maybe some shopping. Maybe a club tonight. Stay tuned for more, including some photos.

I haven’t been ‘blogging’ for quite a while, so I thought I’d maybe try to do some while on vacation.

Today I’m off to London for a really quick vacation. I’ll be back Monday night.

Why so short a stay, you may ask? Well, Eusebio and I couldn’t quite coordinate enough vacation days together so we did the best we could. It was an opportunity we wanted to take, though, since the tickets were a phenomenal price: $212.00 each way—cheaper than flying to New York.

Anyway, we’ll just kind of relax, see some sights, etc. We won’t even be there long enough to get over the jet lag!

The last time I was in Russia, it was not really Russia—it was still the USSR. Returning now, some 13 years later, was an entirely different experience.

I just returned from a trip that I’ve been planning for two years. The chorus I sing with, Pacific Sound, was the official chorus representing SPEBSQSA at the Fourth International Barbershop Harmony festival in St. Petersburg.

My main observation is: WOW! The place is entirely different now that people aren’t living under the pall of communism. It was so refreshing to see the white-blue-red flag of the Russian Republic flying over buildings rather than the red hammer and sickle.

It’s nice seeing the double-headed eagle and noting how the people here are beginning to understand and recover from 70 years of the worst repression you could think of. There’s still some lingering flavor of totalitarianism—like that fact that policemen stand on the sides of streets and when they point at a motorist with their baton, the car immediately pulls over and the driver gets out his wallet—but things are so much more pleasant. It’s hard for me to believe that about 15 years ago, we were set to blow each other to smithereens with nuclear weapons. I couldn’t imagine ever doing that now.

I know that there are still troubles there, like the incredible pressures and difficulties of converting to a market economy. A popular saying among Russians is that “Under communism, we had plenty of money but nothing to buy; now, there’s plenty to buy but no money”. For the western tourist, Russia can be an incredible bargain and there are some wonderful things to purchase as souvenirs. Sadly, many Russians can’t afford the basics leading to things like people leaving their children at state orphanages not because they don’t want or love them, but because they can’t afford to support and feed them. Our tour guides told us that a maid in a hotel might make around $50.00 per month—a medical doctor makes around $200.00 a month. It’s all relative, though (it costs about 20 cents to ride the subway anywhere in town and a liter of bottled water is about 35 cents) but it doesn’t necessarily make things immediately affordable.

Another thing that was surprising was how beautiful the people are. I don’t think I ever saw a Russian woman during two weeks that looked anything like the woman on the old Wendy’s TV commercial (and next—Sveem-vear…). It was obviously just propaganda—or clever marketing. As a demonstration, I give you a photo of a young sailor at the historic cruiser Aurora in St, Petersburg talking to his girlfriend:

We even went to—of all places—a gay bar in St. Petersburg. It was small, kind of dingy and really smoky, but it was there. The patrons were attractive and having a good time. It was awesome not for those facts, but for the realization that what they were doing was totally illegal under communism—these fun-loving, attractive patrons would have been earning themselves a one-way ticket to the nearest Siberian gulag.

With all the bickering and annoyance and infighting and haughty self-righteousness of people like the French and Germans, not to say all the “entangling alliances” and interventions we’ve made all over the world, I can’t help but wish we’d just forget about everyone else on the rest of the planet, ally ourselves with the Russian Federation and tell the rest of them to go to hell. There’d be no stopping us, and we’d make the best friends we could ever possibly have among the great Russian people.