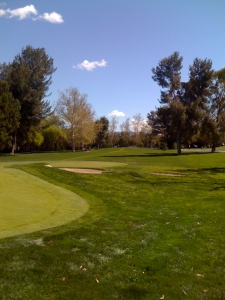 Last spring my friend Mike E. managed to get us some deluxe tickets to watch the AT&T Champions Classic golf tournament, complete with luxury lunch buffet in the clubhouse. It’s part of the Seniors PGA Tour and was the first time I had ever been to see a golf tourney in real life.

Well, when I spoke with some of the volunteers then, I became excited to also volunteer. I’d been thinking about it, but never got around to actually doing anything about it until this past Monday when I realized it was going to be this week! I went up to the Valencia Country Club, located the proper people and signed up.

I ended up working four days and spectating for one, having a great time. I spent most of my shifts working on the fairway of the 10th—which was really exciting during the Pro-Am tournament when the wind kicked up. It was very lucky that we had a tree to hide behind!

On Saturday, Mike and I walked around following the action. No deluxe buffet for us this time, but we still saw great golf. When we arrived around 10:30, it was an absolutely perfect day for golf: gorgeous sunny weather, only a very light breeze. But by the time we walked back to my place around 2:30, it was actually raining on us! Kinda put a crimp in the festivities…

On Sunday, I worked the green on the 14th (which is where the photos are from). As you can see, Valencia CC is an absolutely beautiful course. The exciting bit is that—since I was a hard-working volunteer—I will actually get to play the course in August. That’s pretty cool since there’s no way I could ever afford to join. But it’s also pretty scary considering I watched the pros play and know just how tough a course it is! Denis Watson ended up winning the tournament after 3 playoff rounds.

In the evening, I went from marshaling to transportation. I drove Curtis Strange and his wife down to their hotel near LAX—such nice people. My second and final trip was fun too: I drove Brad Bryant to LAX for a late night flight. It was funny because he had one special request before we left: he wanted to go eat dinner at In & Out Burger! So he treated me to dinner, which was really nice. He says that In & Out is always a must-visit site for the PGA tour folks, since they’re only in California. I said it was the same for me when I visit the South and have to go to the Waffle House since the nearest one is in Phoenix, Arizona. He also gave me an autographed visor which was really cool.

I had so much fun that I hope to do it again next year if I’m still around.