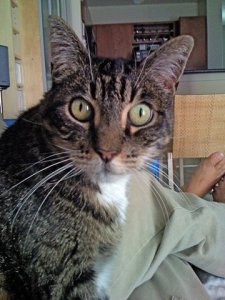 Yesterday morning, after ignoring it for a bit too long, I finally took my female kitty Victoria to the vet. She had turned into nothing but skin and bones while I was gone, and I was trying on my own to bring her back thinking that she had just gone on a “hunger strike” because she missed me.

Well, turns out she was chronically dehydrated, has a serious bladder infection and potentially other ailments. The wonderful doctor (Dr. McFarland at The Cat Doctor and Friends, Santa Clarita) took some tests and was actually glad to see the infection because it was something treatable. She stayed overnight at the kitty hospital for treatment and recuperation and I’m on my way to see her this morning and listen to the prognosis. The initial outlook was that she does have a better-than-50% chance of recovering, but she is getting old (my cats are both 15-16). It’s kind of expensive getting her treated, but what else can I really do right at the outset? It would be sad, but if she has to be put to sleep, so be it. I guess I’ll know in a little while and be able to post news later…

Last night at The Bengal Club, we played a new WW2 air combat game, Check Your Six hosted by New Robert. It’s sort of like Blue Max with much faster, ore powerful planes (that also tend to get shot up and die a LOT quicker). I guess it was kind of fun, but it will take a lot more than that intro game before I decide. Then again, I really don’t need to get involved in yet another gaming period and rule set. In fact, as I was telling Matt as we carpooled home last night, since my focus is turning more and more to Japan, I seem to be really struggling to maintain any interest in gaming at all.

In a way that’s good: it should spur me on to even greater efforts to clean up my gamers clutter and eBay with a vengeance. I’m also going to be well and truly ready for the HMGS convention this coming November to sell big-time at the swap meet.