Just the other day, I posted how I’m not really that enthused about writing about wargaming. But I figured that I should at least give it a try after taking some photos at last night’s game. 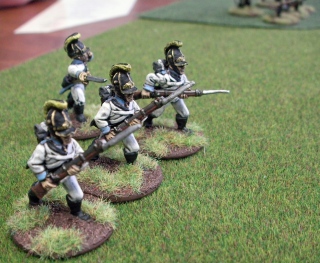 It was our monthly “Napoleonic Night”, and my assignment is to provide our “Second Table” game of Song of Drums and Shakos, a fun set of Napoleonic-period skirmish rules (aka SDS). The games are quick, played with maybe a maximum of a dozen figures on a 3-foot-square table area. It has become one of the favorites at The Bengal Club, so there are plenty of guys learning the rules.

We had two players and ran two games in a couple of hours. The first game is mostly what I’ll be writing about (because it’s the one I took the most pictures of), which was a quick matchup of Austrians vs. Bavarians during Napoleon’s 1809 campaign that culminated with the battle of Wagram. John D. commanded the Austrians, Paul P. the Bavarians.

Bavarian Light Infantry Jägers take up position behind a wall

Paul bought a very expensive squad of Bavarian Light Infantry Jägers, so he was outnumbered from the start. The Austrians had a small detachment of veterans from IR#4 Hoch und Deutschmeister led by an officer, plus a detachment of Jägers. With their 9 to 6 numerical advantage plus the extra leader, the Austrians had two separate groups that could be used to develop a classic “pincer movement”. The terrain was typical wooded Bavarian countryside (sorry about being too lazy to put out actual trees…), with an abandoned walled field in the center.

The Bavarians were the attackers and moved first. They made a beeline for the walled field, but due to some poor activation rolls couldn’t all get there together. In the meantime, the Austrian Jägers advanced on their left into some adjacent woods, the Hoch u. D on the right. If I remember correctly, the Jägers opened fire first from the woods and eventually killed off 2 Bavarians—1/3 of their force!

Bavarians in a Pinch—the Austrian pincer movement takes its toll

By that time, the Austrian Infantry had begun working through the woods on the Bavarian left and Paul quickly saw the handwriting on the wall: crack shots to his front, flanking forces on his left.

And that was about it. Paul retired his forces back to where they came from and quit the field. I think the entire thing was over in 30-45 minutes.

You don’t need too many figures for this game, so…you won’t go broke merely purchasing the unpainted lead

But the beauty of SDS is you can play several fun games in an evening, so we setup for a second showdown—this time Paul’s Prussians vs. John’s Frenchmen (you’ve gotta have at least one battle that has some French).

Both sides were balanced in numbers—11 figures each—but the French once again had two types, Ligne and Légére. I only have one photo of this longer-running battle and it shows the position where the French spent most of the game.

This time, it was a more close-run thing. The French got pretty chewed up early on, the vaunted Chasseurs suffering 50% losses. It came down to a make-or-break situation as both forces started showing their fatigue and casualties mounted. 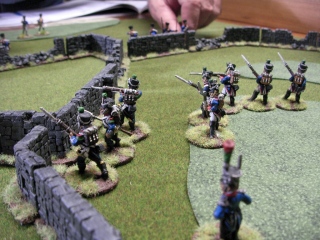 In the end, the Prussians were the first to reach their Morale test point (after losing over 50% of their total force), but everyone passed their checks—except their officer! Paul went ahead and conceded.

The Bavarians and Prussians are Paul’s beautifully painted 28mm HAT plastic miniatures. The French and Austrians are my Foundry figures painted by our own illustrious Colonel Winky. You don’t need too many figures for this game, so you can make each man his own little work of art—and unlike the typical large-scale Napoleonic rules, you won’t go broke merely purchasing the unpainted lead. If you love the spectacle of Napoleonic uniforms and warfare, you should give this fun set of rules a try.

You can purchase and download the PDF files of the rules from Ganesha Games by clicking here.