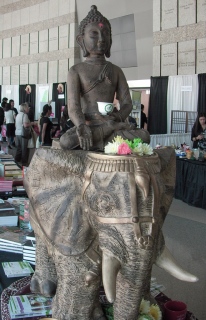 I had a really fun day Saturday in downtown LA.

The first item on the agenda was the 1st Annual LA International Tea Festival at the Japanese American National Museum in Little Tokyo, created and sponsored by my friends at Chado. It was an excellent event and I certainly hope it will indeed become an annual affair.

But it was also nice since it happened to coincide with the first weekend of the annual Nisei Week festivals and celebrations, so the whole area was buzzing with activity. There were so many things to see and do and I was so wrapped up in them I completely forgot to eat lunch!

One of the nicest things these days about going downtown is that I can take the Metrolink train from Santa Clarita and not have to worry about parking, traffic and all that mess. Not only that, but in July they started offering a $10.00 Weekend Pass that lets you ride from Friday night through Sunday midnight anywhere on the Metrolink system–a heck of a deal. It’s very convenient to Little Tokyo too: from Union Station it was one stop on the Gold Line (also free with the Metrolink ticket) and then literally across the street to the Museum. Nice!

The tea festival was quite interesting. The main hall had vendors dispensing a great variety of teas and teaware covering the gamut from White through Pu Erh. I purchased my first ever Pu Erh cake from the very nice people at Bana Tea Company–an earthy 2006 vintage autumn harvest Denong brick. They even gave me a lovely handmade Pu Erh pick as a gift. I also purchased an excellent, high-grade Korean green tea unlike any I’ve ever tasted (Luxe Green Tea from Hancha Tea).

But in addition to the vendor exhibits, there were several tastings, workshops and lectures available. I enjoyed the tasting given by Rona Tison of Ito En (the makers of the classic Japanese bottled green tea, Oi Ocha) and another tasting provided by the Chado team. I attended a particularly great lecture on tea given by Devan Shah (president and owner of Chado) that really helped fill in a lot of holes in my understanding. I can now say that I have a fairly good basic understanding of the full spectrum of the world of tea–and I can see just how fascinating and complex a subject it can be. I’m well on my way to becoming a full-fledged tea snob! 🙂

By the time I’d realized it, nearly 4 hours had already passed–and I’d forgotten lunch! I decided to make my way over to the JACCC building where most of the Nisei Week displays and activity were taking place. Each floor of the building featured a different exhibit. I began with the top floor where I watched a demonstration of the Japanese Tea Ceremony. This was also fortuitous because it was being narrated by the same fellow who I remembered from Anime Vegas a couple of years ago–we spoke, and I am hoping to join them someday and learn the Way of Tea myself.

The fourth floor featured a small display of Samurai swords, accessories and some replica armor. Did you you know you can purchase your own set of customized armor handmade in Japan?Of course, you might not want to see the prices…

The third floor’s display seemed to be closed (by now it was getting late in the afternoon) and the second floor featured a small selection of Sumi-e ink painting with lots of items for sale by the artists.

The main floor featured some truly lovely Ikebana displays. I really enjoy looking at the different styles of arrangements, but am partial to the more naturalistic and minimal examples. It’s especially interesting here in the US to see how the art form is expressed using native materials.

By this time, I was getting really hungry so stopped for a late lunch at one of my usual restaurants. Strolling back through the Japanese Village Plaza, I was happy to see it festively decorated and filled with lots of people enjoying the events. Kitty-chan was even there for people to get their photos taken.

In all, a very satisfying day (capped off by a sprint through Union Station to the waiting Metrolink train home–I made it with a whole 30 seconds to spare)!